On a warm Wednesday evening in May, a school cafeteria in Nicetown was filled with members of the community. They’d all come to hear the 350 Philadelphia team explain the proposed gas power plant at SEPTA’s nearby Midvale Bus Depot.

We’d read about this plan last fall, in articles by State Impact, the Inquirer and PlanPhilly.

Some in the local sustainability circle applauded this project because of the touted efficiency of a CHP (combined heat & power) project, where the heat generated by burning fossil fuels is used to, typically, heat water.

So we began going to SEPTA board meetings, even spoke at some of them, met with SEPTA management, began speaking with people in the neighborhood, built a website with some of our research and a petition, and yesterday, organized the above community forum. 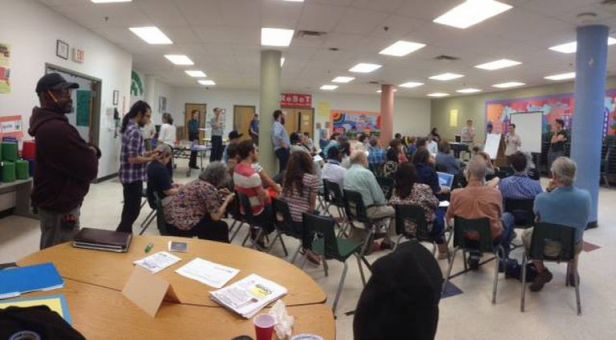 Speakers were Zak Powers, a teacher at Wissahickon Charter School; Mitch Chanin of 350Philadelphia, and Natasha Bagwe of Physicians for Social Responsibility in Philadelphia.

The Q&A period was lively and the networking that happened afterward was dynamite. A sampling of the questions raised & answered as we talked into the night…

Originally written for 350Philadelphia, and published on their blog. -meenal